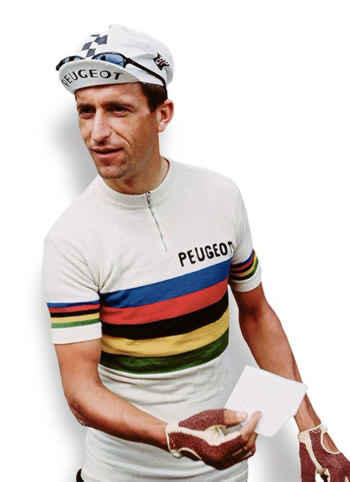 Tom Simpson was Britain’s first world professional road race champion, the first yellow jersey in the Tour de France, and the first British cyclist to win one of the big five single day races called the Monuments. In short Tom Simpson was the first British cyclist to become a star of men’s professional road cycling. He was one the best of his era, twice ranked number two in the world in 1963 and 1965, behind the five-time Tour de France winner and legend Jacques Anquetil.
Tom’s career was class. After winning an Olympic bronze medal as a teenager in 1956 he moved to France in April 1959. He turned professional five months later and finished fourth in his first professional race, the world road championships. Nearly 60 years on only Mark Cavendish and Tom have done better in that race.
In his short pro career, just seven and a half years, Tom Simpson won three Monuments; the 1961 Tour of Flanders, 1964 Milan-San Remo, and 1965 Il Lombardia, which is still a British record. He won stage races, including another first for Britain in the 1967 Paris-Nice. And in 1963 he won Bordeaux-Paris, a 365-mile single-day race that harked back to the early days of cycling. It’s gone from the race calendar now, but it was a Classic in its day.
Tom had a huge following in Europe, where he created an archetypal English gentleman persona, and he was very popular with the press. But his easy charm and quick wit hid an enormous drive. Tom Simpson needed to win. He enjoyed the trappings of success; fast cars and holidays, and he wanted security and a good life for his wife and two children. He also wanted to be remembered as one of the greats.

“All of them; Coppi, Bartali, Anquetil and the rest, they all won races by big margins. I want to win like that,” he once said. He also wanted to win the Tour de France, and that drive cost him his life on Mont Ventoux in 1967.
He pushed too hard, gambled too much in that Tour. He was used to it, he’d had to push to win before, because as an Englishman in a foreign team he had to attack to get team support. And with the Peugeot team Tom raced for from 1963 until his death support was grudging at best, non-existent at worst.
Having national teams in the 1967 Tour de France gave Tom chance to leave Peugeot, and he signed for the Italian team, Salvarani before the Tour. He was already friendly with Felice Gimondi and other key members of the squad, so could be confident of more support in 1968 and beyond. And for 1967, although the British Tour de France team wasn’t strong, at least it would be loyal. It was Tom’s best chance so far to win the race, but it wasn’t to be.
How the fund started
In 1996 the Tom Simpson Memorial stone on Mont Ventoux was in danger of falling down. It was put there in 1969, two years after Simpson’s death on the mountain during the 1967 Tour de France. It was placed beside the spot where he fell, however, after nearly 30 years of enduring the extreme mountain climate at over 6000 feet the foundations were badly eroded and the memorial became detached from the mountain.
With the aim of repairing it and securing the memorial’s future the Tom Simpson Memorial Fund was created in late 1996 by Chris Sidwells and Dave Marsh. Then with generous donations from people who knew Tom, or who had been drawn to his story, and by cyclists from the wider area around Harworth, where Tom grew up, the memorial was saved.
The actor Simon Dutton played a crucial role at this stage, not only donating some of his own money to that already raised, but liaising with the authorities in France and doing the initial work to save the memorial, which was secured to the mountain by providing it with completely new foundations.
Since then the fund has gathered momentum, in particular through the annual Tom Simpson Memorial Ride. This allowed the creation of a memorial stone in Harworth and Bircotes, outside the Miner’s Welfare Sports Pavilion on Scrooby Road. In 2007 the Fund helped with Tom’s daughter Joanne Simpson’s initiative to build steps from the roadside up to the Ventoux memorial. We are still involved with the Ventoux memorial’s ongoing care, as well as with other projects you can read about on this website.